With the Elder in daycare and Wyll working, the baby and I get stuck with the house chores. We go shopping once a week and try to keep laundry down to three times a week. As much as we try not to, sweeping, mopping and dishes seem to be everyday chores.

The weather has been tres hot in Reno and I’ve been opting for things I can make in the instant pot. Yesterday I made red pepper hummus, falafels (yes the bean balls), and baba ganoush in the Instant Pot. I felt so professional! We fixed them up in pitas with cucumber, tomatoes and homemade tzatziki. Everyone loved it. We ate most of the pita but nothing like a flour tortilla to step up and be a wrap. Hurray for quick lunches!

Last night I made a big pot of yogurt in my sleep. It was so easy. We have things to go with it like apples, bananas, grapes which the baby has now learned he can grab them out of the fridge. This morning we had overnight rolled oats. They were so good and easy. Fridge cold and peanut butter chocolate, just mix together with equal parts oat and ‘milk’ (I did a cup rice milk with 1/4 cup PB and 1/4 cup chocolate pudding I made) and chill in the fridge. I will definitely be doubling it next time.

Beets are in the Instant Pot right now. So easy to steam them up then throw them in a vinegar marinade. I’ve been ‘roasting ‘ many vegetables this way, bell peppers, garlic heads and all my side veg- potatoes, carrots, squash, corn. It takes about an hour to do a pot of beans from dry with the Instant Pot. It’s easy to take whatever veg and beans then heat it up on the stove either in a tortilla with cheese or in a bowl with avocado.

A long time goal of mine mostly due to being in Korea is to master seafood, namely octopus, squid, and cuttlefish. I didn’t gather up courage or even think about what was happening when Wyll picked up octopus at the market today. He likes to push me into my goals. It was a good price and I was wanting to try a Tom Colicchio recipe for a calamari sandwich. I ended up with something probably really different but terribly delicious. This recipe was so good I felt obligated to share it right away. There were a few prep things I had to do like learn to clean and cut baby octopus. Luckily YouTube is full of wonderful people doing amazing things so I figured it out kinda quick. Basically you cut off the tentacles, push out the beak and cut into sections. Then slice the head so you can turn it inside out to pull off the brain sack then cut it off at the eyes. It took four before I felt really comfortable doing it. I ringed them off and set them in a colander to dry off a little. Then I went to work on the green peppers. I pan fried them whole with fish sauce and garlic. I mixed up some panko crumbs, corn starch, salt, pepper, garlic powder, and gochu powder. I mixed in all the octopus trying to get an even coat. I heated some oil in the wok and covered the bottom with octoparts! I let them cook to pop songs then put them on paper towels to dry. I didn’t really have much for Colicchio’s sandwich just an idea about how good it would be. I did have Saracha which I mixed with some lemon. Sorry, Tom, no mayonnaise. I sliced up tomato, very thin, diced onion, chopped up some curly parsley, and got out some radish sprouts for the sandwich. I assembled my sandwiches on some French bread, delicious.

Often Wyll and I reminiscence about the food we ate as children. He talks about the tacos his mom use to make with ketchup, something she wouldn’t dream of doing today. My food memories from this time are cooking pumpkin and making Sloppy Joes in apartment ‘B’ when we lived near my cousin Gideon. And of course, the time my mom convinced my sister that we were having chocolate pancakes for breakfast- they were buckwheat. Sloppy Joes are the kid food that I think about. I wonder if they are as good as the memory because many people thought spaghetti-oes were good twenty years ago.

Not long ago, I floated the idea of making Joes for dinner and, as i recall, Wyll protested because he didn’t want to eat sweet, slimy children food. The spaghetti sauce in Korea is pretty sweet so yesterday, I proclaimed “I’m going to make Sloppy Joes for lunch tomorrow…”

Waiting with slightly held breathe for some sort of okay regarding the father’s day menu.

Did I imagine this previous conversation? Well, no need to get into this now: Sloppy Joes for father’s day! I hope it’s a good idea.

This morning the baby and I went to the store. Park asked “Where is Wylliam?”

“Oh,” he replied knowingly, you would think father’s day was celebrated in Korea. Maybe it was the understand that all anyone wants to do is stay at home and play cards by themselves. Or whatever it is other people do alone because I doubt that Wyll does much else when I’m not around. Park asked if he was delivering our groceries today, “배달?”

I respectfully decline although, really, I should, but I’m hungry and the Sloppy Joes are getting tastier with every minute. Here are photos of the Spaghetti sauce and Gochu pepper, I used: 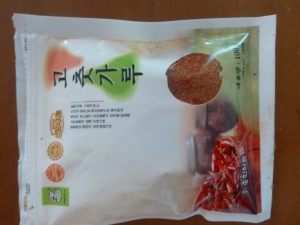 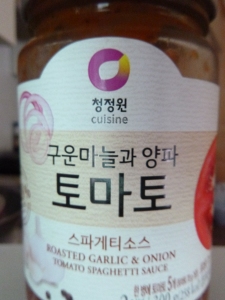 200 grams (about a half pound) of ground pork

Serve on bread. Try to eat with hands, make sure a for is close by.

I paired it with a cabbage salad. It was a great idea, but needed to be dressed. It probably needed a little more thought. It was well received and I’ll definitely make Sloppy Joes again. Here are some pictures of the final project. 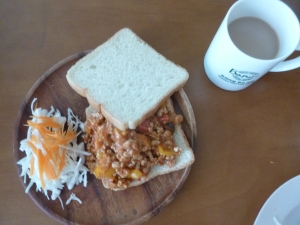 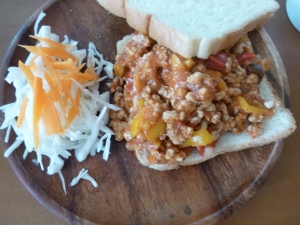